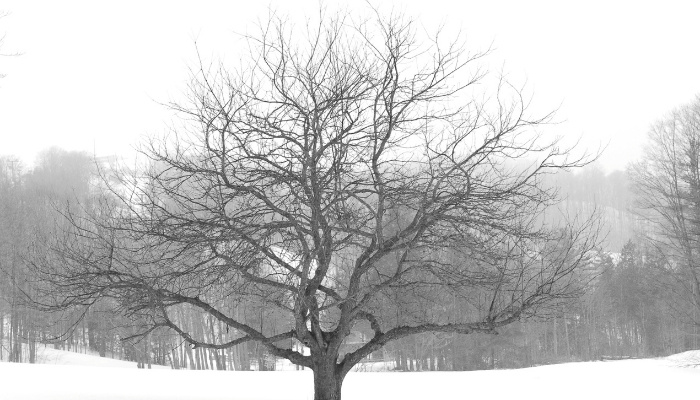 Winter can be a challenging season for most plant growers. While apple trees are known for being hardy in winter, they aren’t made of steel. It’s best to prepare them before the first frost hits.

Yes, apple trees can survive winter. Most apple trees are used to standing strong in harsh winters with some extra care. Plus, their high need of 500-1,000 chilling hours makes it essential for them to grow in cold places. Some varieties can tolerate temperatures as low as -30°F.

So, if you are wondering, how to protect your apple trees in winter? Read on to find out.

While apple trees are hardy trees that can face winter strongly, it’s best to handle them with extra care during these extreme conditions. For example, pruning your apple trees at the wrong time can damage them, so knowing more about how to protect them during winter is vital for their survival.

The temperature tolerance of apple trees varies between the different kinds. However, most apple trees grow hardy in zones three to nine.

They tolerate cold temperatures as low as minus 30°F and prefer areas with temperatures under 90°F. That said, apple trees need a certain number of chill hours to produce fruit, so they won’t do well in constant hot weather.

The average number of chilling hours needed for most apple trees is 500-1,000. However, some varieties settle for only 300 hours.

Chill hours are important for fruit production because the hormone produced by chilling hours is responsible for making buds bloom and leaves grow. Depriving them of these hours can result in underdeveloped or irregular buds.

What Happens if an Apple Tree Doesn’t Get Enough Chill Hours?

If an apple tree doesn’t get the necessary number of chill hours, the buds won’t develop or they might take longer to bloom during late spring. Also, this will stall foliage growth.

The longer the blooming season, the more susceptible the tree to diseases, leading to fewer and misshapen fruits.

If apple trees are regularly exposed to lower than 28°F temperatures, they might experience negative effects such as:

Do Trees Grow in Winter?

Most trees are dormant during winter. However, some trees can grow in winter when the temperatures don’t drop below zero. Dormancy is important for trees to save water and nutrients until the arrival of spring.

Yes, potted apple trees can survive winter. However, potted trees are more exposed to the dangers of frost than those rooted in the ground. So, there are some extra steps to take to protect them:

Yes, young apple trees can also survive winter. That said, they need more protection in addition to the basic protection provided for mature ones.

For instance, young apple trees are more likely to dry out during winter, so it’s best to water them deeply and regularly in late autumn. Additionally, young roots can get uprooted because of temperature fluctuations, so it’s important to protect the roots.

Plus, it’s essential to fence these young trees with hardware cloth to protect them from animals such as deer. It’s best to extend the cloth more than 12 inches into the soil to ward off rodents.

Some of the best apple trees which can survive winter are:

Caring for Apple Trees in Winter

While apple trees are among the hardiest trees, it’s essential to properly care for them to fully enjoy their juicy fruits and beautiful looks. Preparing your trees before winter and pruning them is vital to keep them healthy and thriving.

How To Prepare Your Apple Trees for Winter

There are some steps to help make your apple tree stand tall in winter.

Thoroughly clean the area around the tree from rotten fruits and dead leaves. It’s best to get rid of any leaves or fruit that might be diseased or rotten.

Using a white latex mixed with water to paint your tree will protect it from sunburn. You can also cover the trunk with a tree wrap. That’s because the reflected sunlight on the snow can damage the tree’s bark.

Circle around your tree with organic mulch such as straw or wood chips to shelter the roots against frost. However, avoid heaping the mulch up around the trunk to not damage the bark.

Watering your apple tree deeply before winter hits will nourish and safeguard its roots. It’s best to let the water seep into the soil by one foot.

While pruning apple trees is important in summer, it’s vital in winter. It’s best to start pruning your tree during the later months of winter. Since pruning in early winter or fall will cause the tree to produce new, fragile branches not ready to face the frost.

Here’s how to prune apple trees in winter:

Do You Have To Cover Fruit Trees in Winter?

No, it’s not necessary to cover up fruit trees in winter. Most fruit trees are hardy during winter. However, it’s best to cover early budding trees that bloom in early spring to avoid freezing up the blossoms.

Yes, a late spring freeze can result in a smaller harvest. The apple tree species, temperature, and level of crop growth will determine the severity of the hurt.

So, can apple trees survive winter? Yes, they absolutely can since they need 500 to 1,000 chilling hours to grow properly.

With a right-timed pruning session and lots of preparation, your apple tree will be able to thrive in winter.