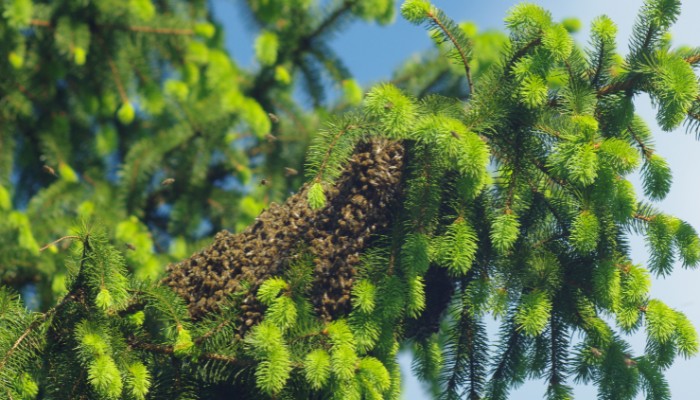 Catching a swarm of buzzing bees is not nearly as treacherous as it sounds – in fact, bees are at their most passive when swarming since they feed beforehand, reducing their ability to sting.

(Even so, it’s still imperative to don suitable safety gear and treat the bees with the utmost care during the removal process!).

Here’s a step-by-step guide to capturing a honey bee swarm, what you’ll need, plus answers to common concerns…

1. Determine Whether the Swarm is Within Safe, Easy Reach

Examine the swarm’s location first of all. Are you able to access the swarm with a stepladder? Because anything further out of reach should be avoided and left to a professional bee rescuer with the permission of the property owner.

Has the swarm settled on a small branch that could be cut easily or is the branch shakeable? If the swarm is hanging from a rigid branch, object, or building within easy reach, a safe swarm removal is possible but will require a different catching method.

2. Obtain Property Owner’s Permission (If Outside Your Home)

If the swarm is located somewhere other than on your own private property, you must get proper permission from the property owner. Not least because the swarm removal may require cutting down foliage.

Different counties/states may have different regulations regarding a bee swarm removal depending on potential damage to property/risks posed (if any) to the owner.

So firstly, contact your local authority to determine if permission is needed before contacting the property owner and obtaining their verbal/written consent.

3. Prepare the Necessary Equipment Based on the Swarm Situation

In addition to the main above-mentioned supplies, you may need branch loppers or a small hand saw if, for instance, the swarm has settled onto a branch. Or you will require a stepladder if the swarm can’t be accessed at ground level.

4. Change into Gear & Place Sheet on Ground Beneath the Swarm

Put on your protective gear and lay out the large white sheet on the ground beneath the general swarm area. Place a weight or stone on each corner of the sheet to prevent it from blowing away.

Next, spray the swarming mass with some of the sugar syrup. Gardening author and contributor at Acreage Life Samantha Johnson suggests this helps “settle the swarm and hold them into one group” for easier capture.

6. Maneuver Swarm into the Cardboard Box Using 1 of 3 Methods

Capture the swarm in the cardboard box using the most appropriate method for the swarm’s location.

If the swarm has gathered on a small shakeable branch, hold the box as close beneath the swarm as possible and give the branch a sharp shake. Shake the branch vigorously a few more times. This should dislodge most bees, but you can move the rest into the box using the bee brush.

If the swarm is attached stubbornly to a shakeable branch, cut off the branch using a branch lopper (you could also use a hand saw, but a branch lopper achieves a quick, sharp cut to minimize disturbance).

Enlist the help of a second person (also wearing protective gear) to hold onto the branch while you cut. Once removed, carefully set the branch inside the cardboard box.

As the colony remains together, this method is thought to make the bees feel like they have chosen to move, increasing the likelihood they’ll stay.

Swarms hanging from a high rigid branch, a fence, or building may be coaxed in by holding the box below and using the bee brush to brush them in.

Otherwise, a better method – suggested by experienced beekeeper Roger from Talking With Bees – is to hold the box above the swarm as close as possible with the opening facing downwards. “This can encourage the bees to walk up inside the box”.

7. Gently Turn the Box, so the Opening Faces Down & Place on Sheet

Once you have captured the majority of the swarm, carefully bring the cardboard box towards the ground and turn it over so that the box opening is facing downward.

Place the box in the middle of the sheet, propping one corner open with a brick or one of the sheet corner weights to provide an entrance.

Leave the box in this position until dusk to allow the remaining bees to find their way into the box. It’s impossible to capture every bee, but placing the box close to the original swarm location will give foraging bees easy access on their return.

8. Leave the Swarm Overnight before Hiving Them Permanently

Placing the bees into their permanent hive doesn’t have to be done immediately. After leaving the box in this position overnight, remove the weight propping up the entrance and gently collect each corner of the sheet over the box and tie into a sack. This allows you to move the swarm easily to their new permanent hive.

Transfer the swarm into their new permanent hive the following day. A suitable hive box is a nucleus (a small hive holding around 5-10 beeswax frames). Simply turn over the cardboard box and shake them into the new hive box.

Place the hive box lid on top and leave them undisturbed for a week to settle and build their honeycomb! (Here’s how to make the hive box more alluring)

How Long Do Bee Swarms Stay?

Bee swarms may remain in place for a few hours or several days, according to the Clemson University Cooperative Extension. Swarms cluster together temporarily for warmth and to save energy whilst ‘scout bees’ are sent out in search of a more suitable home, so the length of their stay will depend on their success in house-hunting and weather conditions.

What Time of Day Do Bees Swarm?

Bees typically swarm during the warmest hours of the day in late spring-early summer around midday. If there is rain, the swarm will stay in place and emerge again when the sunny weather returns.

What To Do After Catching a Swarm of Bees?

Once you have captured the swarm in a container they’ll need to be moved into their permanent hive within the next 24 hours, but wait at least until sunset to do this as any scout bees sent out earlier in the day are likely to return by dusk.

Depending on how you find the swarm, you will then lower or lure the swarm into an inviting hive box, ideally containing an empty comb to give them an incentive to stay.

After transferring them to their new home, you should then leave them alone for at least a week before inspecting them so the swarm can settle into the hive.

Will Bees Move Into an Empty Hive?

According to Hilary Kearney, author and founder of urban beekeeping business Girl Next Door Honey, bees are more likely to move into a used and lived-in empty hive than a brand new empty hive “as the scent of beeswax and propolis will motivate them to move in and stay put”.

If sourcing a used beehive isn’t an option, you’ll need to supply the new hive box with an empty comb – “this is like giving them a furnished apartment” says Kearney, “making it more appealing.”

What’s the Best Time To Catch a Swarm of Bees?

Swarms don’t stay in place for very long so the best time for capturing them is as soon as you find them! If you happen upon an active chaotic swarm, watch carefully for the colony to settle onto its temporary location – such as a tree branch, for example – as the swarm will be infinitely easier to capture once the bees have honed in on the area and formed into a tight mass.

Swarm traps or ‘bait hives’ may increase the chances of attracting a swarm as the interior is typically coated with beeswax and a bee pheromone lure like lemongrass oil.

If a swarm trap is unsuccessful, it could be that early scouting bees found the trap’s location less appealing compared to a nearby hollow tree, or that the size, material or bait within the trap simply didn’t appeal to the scout bees.

Actively capturing a swarm of honeybees can be done in a matter of minutes, but it will take a full afternoon for the foraging ‘scout’ bees to return to the original swarm location.

You’ll know you have captured the swarm correctly when you attract half or more of the colony into the box as this means you have likely secured the queen, prompting the remaining worker bees to follow.

Once the captured bees are transferred into their permanent hive, you’ll know they have settled into their new home when you uncover the lid after 1-2 weeks and see they have begun building their comb, signaling the queen is preparing to populate the hive once more!