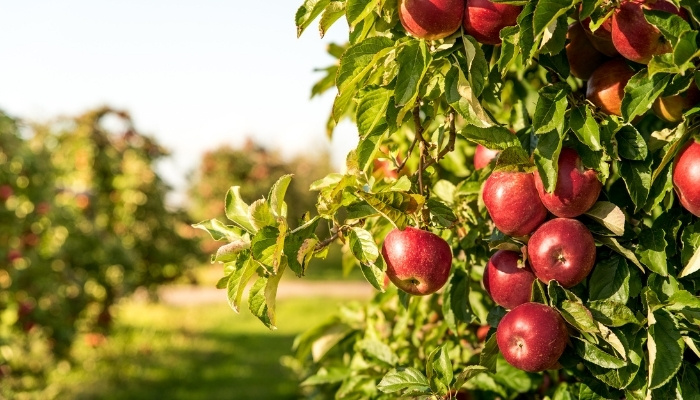 Apple trees are as American as, well, apple pie! When you’re planting them, it’s crucial to understand the layout of your property so that you may select a location where your apple trees will thrive.

For apple trees to be happy and healthy, they need to be part of a diverse landscape that includes plenty of companion plants like shrubs, groundcover, herbs, flowers, and more.

Read on below and explore our list of 22 ace companion plants for apple trees, including a full rundown on each one!

Artichoke is an interesting companion plant choice for fixing nitrogen issues. It doesn’t put a lot of nitrogen back into the ground; rather it takes up the extra nitrogen from the soil and balances the surrounding levels.

These beautiful companion plants bloom with gorgeous flowers and at the same time produce a pungent aroma that pest insects avoid for dear life.

If you’re already growing herbs like dill around your apple trees, fennel makes a great addition as well. Fennel is particularly helpful in the spring when young aphids are rampantly devouring fresh green shoots on trees and plants.

Dill is a perfect companion plant for attracting more predator insects like praying mantises and ladybugs to the vicinity of your apple trees.

Mint is not only enchanting appearance wise, but it also keeps away a lot of nasty pests that would otherwise love to set up shop on your blooming fruit trees.

Comfrey is a great companion plant when you have numerous species growing in a close proximity that all have different nutrient demands. It draws nutrients from deeper in the ground and delivers them to the root zone level of nearby plants.

They may not be the first plant you’d consider for apple tree companions, but dandelions are definitely deserving of their place on this list. If you are planting trees on a hillside, they are best planted with dandelions.

These beautiful wildflowers attract predators that feast on common pests. They also draw in local pollinators like bees to boost your apple tree’s flower/fruit production.

This herb is the perfect low-key addition to sunny areas around your apple trees. It attracts bees and other beneficial insects, and you get two harvests (cilantro leaves followed by coriander)! Coriander is also great for helping drain an area with poor natural drainage.

Clover is not only lucky; it helps distribute extra nitrogen back into the root zone of your trees as it decomposes into the earth around them.

Rhubarb is an old-fashioned garden plant that works wonderfully as a companion plant for apple trees. It not only solves nitrogen issues, but it wards off harmful bugs as well.

The Siberian pea shrub is one of the top nitrogen fixing and easiest to maintain pea species to consider adding to your landscape as a companion plant for apple trees.

Marigolds are some of the most common garden flowers in the world, no doubt because they have excellent pest control properties. They ward off most types of common garden pests with their smell.

Chrysanthemums are equally as impressive as pest control flowers as marigolds are. Simply planting these flowers every few meters around your apple trees or garden plants keeps a vast majority of pests away.

Nastutium, bless its heart, is typically used as a sacrificial trap plant. Harmful insects really seem to love these guys and will go directly to them and infest them instead of bothering your apple trees.

Wormwood is an interesting companion plant that takes some time to grow but is the best for keeping flies, fleas, and even larvae away from your apple trees and other nearby plants.

Chamomile protects apple trees and any other nearby plants and trees from harmful bacteria, fungus, and disease. It may even increase the flavor of some fruits and vegetables.

Lavender smells and looks like a little piece of heaven. It is an excellent companion plant for apple trees, both aesthetically and because it attracts bees and wards off large pests and harmful insects.

Sometimes called wormwood, Artemisia species are some of the best companions for repelling larvae, flies, and similar pests. They also grow back each year and be harvested.

Sea buckthorn provides nitrogen management to the local soil, supporting healthier and happier apple trees. They also produce berries that may be harvested each year!

Just remember that the landscape and climate play a big factor in which companion plants are right for your apple trees, as well as where your apple trees should be located for the best results in the first place.