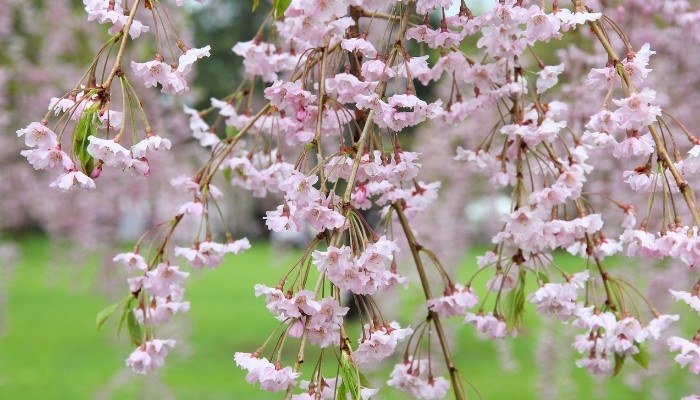 Its branches all start near the top center of the tree and extend towards the ground, giving the weeping cherry tree an umbrella-like appearance.

Weeping Cherry Tree Fruit – What You Need to Know

Although weeping cherry trees are ornamental, there is still much to learn about its fruit.

Weeping cherry trees can grow to a height of eight feet for dwarf varieties. Full size varieties can grow all the way to 20 feet. Since they are weeping trees, they generally grow out in an umbrella shape so they’re often as wide as they are tall.

In the spring, they have white or pink blossoms that cover the branches, occasionally turning into fruit in the summer.

The weeping cherry tree has long, slender branches and smooth gray-brown bark that tends to remain smooth even as the tree ages.

As with most deciduous trees, in the fall the weeping cherry tree enters dormancy by changing the colors of its leaves and shedding them. The leaves change colors anywhere from yellow to orange depending on the variety.

Weeping cherry trees bear fruit in the summer after the blossoms have been pollinated in the spring. Some trees can take up to seven years to produce fruit after planting, but most will fruit within three to five years. If you choose to harvest the fruit produced by weeping cherry trees, the best time to do that is the summer, usually July.

Weeping cherry trees usually have small, extremely sour fruit that’s considered inedible. It is not recommended for humans to eat the fruit, the intense sour flavor of the fruit is not palatable.

Aside from an extremely sour taste, eating the fruit from a weeping cherry tree is known to cause stomach discomfort, nausea, diarrhea, and vomiting.

How to Harvest Weeping Cherry Fruit

When the fruit are ripe, cut the stalks of the cherries with scissors, since pulling them off by hand might injure the shoots and allow infection to set in. Also, make sure not to remove the spur from the tree, as this may reduce the potential for the tree to fruit next year.

Weeping cherry tree fruit is excellent bird food. You may have noticed this already when the birds have come to visit your tree and feast on the fruit. Since humans can’t eat the fruit, it’s an excellent option for your local birds. Additionally, cherries are organic matter and can be added to compost to add several minerals to your composted soil.

If your weeping cherry tree isn’t bearing fruit, the most likely reason is that it’s not a fruit bearing variety.

If the temperature isn’t right, your weeping cherry trees may not bear fruit. Frost will damage immature fruits and flowers to the point where your tree will not fruit that year. If frost is an issue, it’s recommended to cover your tree whenever frost is expected during flowering and fruit formation to protect the fruits.

Benefits of Planting Weeping Cherry in Your Garden

Weeping cherry trees are most often planted as a focal point during the spring. They provide a beautiful, cascading array of pink or white flowers that can be easily identified as a cherry blossom.

The weeping varieties add even more uniqueness to your garden through an umbrella-like display of these flowers.

The only part of the weeping cherry tree that’s safe for dogs to eat is the fruit. All other parts of the tree including stems, leaves, and seeds of the tree are toxic to dogs.

Are All Cherries Edible?

Not all cherries are edible. While there are no toxic cherries, many grow on ornamental trees that are unpalatable and could cause digestive issues if eaten.

What Are Common Cherry Tree Pests?

Weeping cherry trees are susceptible to many common pests and fungal diseases:

The most common cause for insects on your tree is dry soil. If you’re seeking a natural solution to these pests, aim to control the soil moisture and add fertilizer. For a more direct way to handle insect infestations, aim for Neem oil and insecticides.

The best way to handle most fungal diseases is to remove the affected branches from the tree and destroy them. If they’re composted, the fungus could spread through the compost. The only exception to this is verticillium wilt.

There is no cure for verticillium wilt and since it lives in the soil, if the tree is succumbing to the fungus then it should be removed, planted elsewhere, and nothing should be planted in the same hole.

While weeping cherry trees often bear fruit, it’s not a fruit that humans should be eating. It makes a great bird feed or decoration if you can preserve the cherries. That doesn’t mean that a weeping cherry tree isn’t perfect for your yard, however.

They make excellent focal points and will dazzle you with stunning displays of cascading flowers each spring.