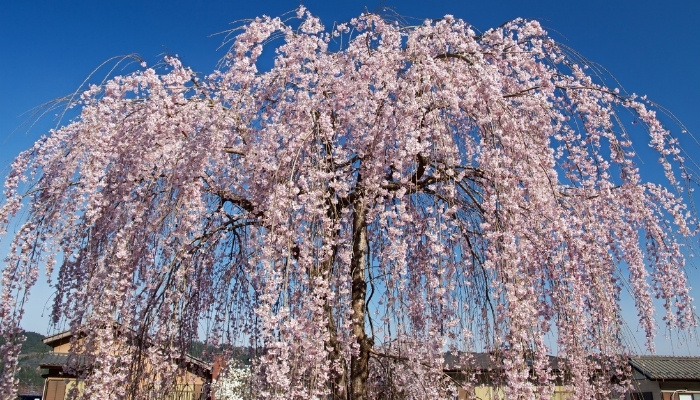 Despite their name, weeping cherry trees are a joyful addition to your garden. When in bloom, the canopy becomes a large cluster of delicate flowers that spread joy everywhere.

However, it takes some work to get the weeping cherry into good shape, not just the regular watering and feeding. Pruning is a crucial aspect of weeping cherry tree care.

Even when you get the timing right, pruning the weeping cherry tree is not a straightforward matter. Read more to find out how to prune the tree and encourage it to bloom year after year.

Usually, weeping cherry trees are either grafted or natural trees. How you approach the pruning process depends on whether the tree is grafted or not.

If you’re not sure what type of weeping cherry you have, check the tree trunk near the ground. If you find a knob, then the tree is grafted. Otherwise, you’re looking at a natural weeping cherry tree.

If you miss that opportunity, then you can prune it in the early spring before the first bud has emerged. In either case, the tree has to be completely bare.

Can You Prune a Weeping Cherry in Winter?

In practice, a natural weeping cherry tree can be pruned either in the late fall or early spring. A grafted tree should be pruned in the fall since the snarl or branches at the heart of the canopy are prone to damage by the wind.

However, winter is not a good time for pruning the weeping cherry, whether it’s grafted or natural. Pruning puts the tree under a lot of stress that can weaken the tree during the winter.

How Often Should You Prune a Weeping Cherry?

The weeping cherry tree should be pruned once a year to maintain its shape, trigger new growth, and promote good health.

However, some of the outer branches of the tree grow at a fast rate as they try to reach the ground. You can trim these branches lightly whenever you need to maintain the weeping look of the tree. The inner branches are only pruned annually when the tree is dormant.

When To Prune a Dwarf Weeping Cherry Tree

A dwarf weeping cherry tree is often more prone to silver leaf disease. Usually, the tree’s resources go into flowering, which leaves it open to this disease.

You should prune the dwarf weeping cherry in the summer after the tree has flowered. This will conserve the tree’s resources and allow it to focus on developing the trunk and branches and grow a more robust root system.

By pruning this snarl, you avoid damage to the tree’s structure in the winter, which can impact its growth and flowering the next spring.

You should also check for any roots, buds, and any other signs of growth around the graft knob or coming out of the rootstock. The rootstock is the part of the grafted tree right above the ground.

Cut off any such roots or buds you see since they’re not part of the weeping cherry part of the tree.

How To Prune a Weeping Cherry Tree

Before you start pruning the tree, identify whether it’s grafted or natural. The tools are usually the same. Here’s a list of what you need.

Suckers often grow on grafted weeping cherry trees on the part of the trunk closest to the ground. This is the part that doesn’t belong to the weeping cherry. Suckers consume a lot of resources and ruin the appeal of the tree.

Examine the graft knob and the base of the trunk to look for such growths. Remove them with sterilized shears or a blade.

Pruning ornamental trees requires skill and knowing what you’re doing. Cutting off the wrong branch could ruin the tree’s shape. The same applies to weeping cherry trees. Here are a few mistakes to avoid.

How Tall Do Weeping Cherry Trees Get?

The weeping cherry tree averages between 20 and 25 feet at maturity.

What Is the Lifespan of a Weeping Cherry Tree?

The weeping cherry has a lifespan of 30 to 50 years.

The weeping cherry has a fast growth rate, especially for the outer branches reaching the ground. Prune the tree once a year in the fall for grafted trees and either the fall or early spring for natural ones.