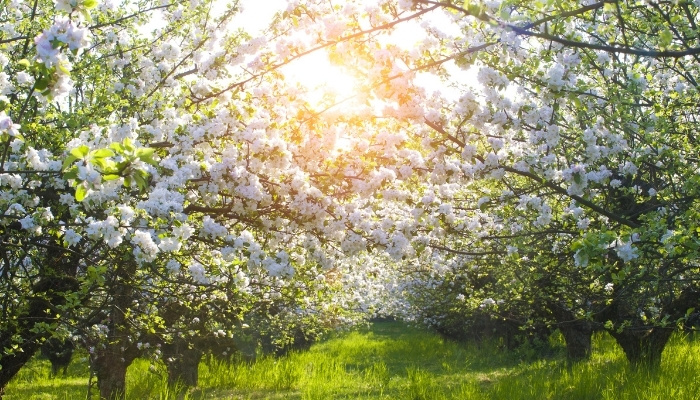 Did you know that there are more than 7000 varieties of apple trees all over the world? When it comes to variety, apples are the most diverse fruit. In the United States alone, 2500 apple varieties are grown.

When do apple trees bloom, though?

Apple varieties don’t bloom at the same time. Early-season varieties bloom as soon as it gets warm in spring. As for mid-season bloomers, they bloom between mid-spring to late-spring. Late-blooming apple trees may bloom at the end of summer.

If you want to learn everything about the apple tree bloom time, you’ve come to the right place! We’ll take a closer look at when apple trees bloom, what to expect, and the factors that influence the apple blooming process. So, keep reading!

Apple trees normally bloom throughout the spring and summer seasons, with different apple varieties blooming at different times. So, there are early-season, mid-season, and late-season apple trees. Let’s take a closer look at each bloom time.

Early-season apple trees bloom between April and May, which are usually the most fruit-bearing trees. Early blooming apples may become ready for harvest in September.

Although we can estimate the apple trees’ bloom time, we can’t determine the exact time. That’s because the following factors affect the apple tree blooms:

When planting apple trees, choose a site that receives a lot of sunlight and avoid shaded areas. Apple trees need at least six hours of sunlight every day for blooming and fruit production.

Having said that, you should paint the trunk and huge branches with white latex and water mixture to avoid sunburn in case they get too much sunlight.

The suitable temperatures are essential for an effective blooming process.

If your apple trees don’t receive enough chilling hours, they may not bloom successfully. If they bloom too early, the flowers can be damaged easily by harsh weather.

To ensure your apple trees will be healthy and bloom successfully, you should water them on a regular basis during the first two years. Moreover, you should make sure the soil is moist but well-drained.

In addition, you should add fertilizers that are proper for the soil while planting to promote root growth. If you’re not sure about the soil type, add a blend of fertilizers every year in the spring.

Your apple trees will usually bloom and produce apples when they’re fully mature. Maturity allows the tree branches to withstand the heavy apples.

Standard apple trees typically reach maturity after four to eight years from being planted, not seeded. Dwarf apple trees, on the other hand, may come to maturity after two years, calculated from the planting date.

Successful pollination, which takes place during blossom time, happens when bees carry pollen from a pollen-producing apple tree to a pollen-receiving one.

When bees land on the anthers (male part) of apple blossoms, pollen sticks to their hairs. Afterward, when they move to the receiving apple tree, specifically to the blossom’s stigma (female part), the apple blossom receives the pollen.

Before you grow apple trees, it’s important to choose the varieties that will make good pollination partners. This is particularly important if you’re planting self-sterile varieties.

All apple varieties need to cross-pollinate for variety in production and heavy fruit-bearing. For successful pollination, you must have at least two different varieties of apple whose blooming times overlap.

You should also know which varieties are good pollinizers and which types are compatible receivers of pollen.

How Close Do Apple Trees Need To Be To Pollinate?

To pollinate, you must plant apple trees at maximum proximity of 100 feet for the standard varieties.

If you plant the apple trees more than 100 feet apart, you should expect poor pollination, which will result in poor apple productivity.

Regarding dwarf varieties, they should be placed at least 20 feet x 14 feet apart.

Although there are self-fruitful apple tree varieties that are known as self-pollinating, it’s always better to cross-pollinate. This is particularly important if you’re keen on fruit productivity. Cross-pollination results in more regular and abundant fruiting.

Pollinators are agents that transfer pollen from one apple tree variety to another. The best apple pollinators are:

Honey Bees, mason bees, and bumblebees do most of the pollination work when it’s pleasantly warm. However, chilly and rainy weather will hinder the honeybees from carrying out their pollination task.

Do Apple Trees Flower Before They Leaf?

Apple trees don’t flower before they leaf. You’ll be able to see the leaves springing on your apple trees with the warmth of early spring. After three to four weeks, the apple’s white to pale-pink flowers start to emerge.

Although it’s difficult to tell which buds will produce vegetation and which will flower, growers need to count the fruitful buds to avoid crop load by pruning.

At What Age Do Apple Trees Blossom?

Don’t expect your apple trees to blossom before they reach two years of age. You can calculate their age from the day you’ve planted them.

Can an Apple Tree Pollinate a Pear Tree?

Apple and pear trees can’t cross-pollinate because they neither belong to the same species nor the same genus.

Apple trees can only pollinate apple trees, especially when they belong to different and compatible varieties.

Yes, they are. In fact, both apple tree blossoms and leaves are edible. They’re also high in antioxidants and minerals.

Just keep in mind that apple blossoms shouldn’t be consumed in bulk. Their sweet and sour flavor can be tempting, but they contain small quantities of cyanide.

Apple blossom tea, on the other hand, makes an excellent stress reliever. It can also improve digestion and clear acne.

“When do apple trees bloom?” This question is common because different apple tree varieties bloom at different times.

However, in general, the blooming of apple trees usually begins in the early spring until late summer, as long as the trees have matured and received the required chilling hours.