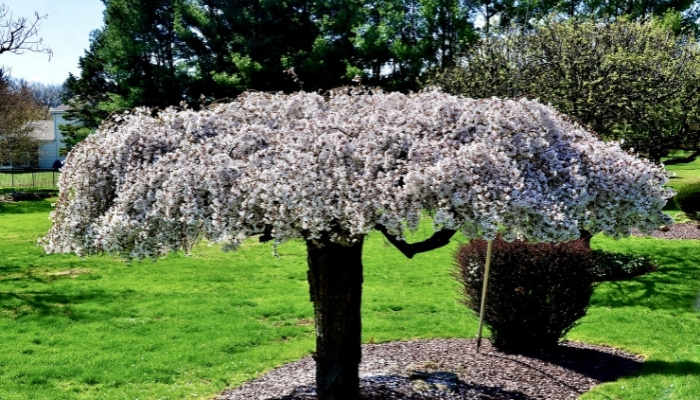 Weeping cherry trees are a sight to behold, especially in the spring when they are bright pink, white, or yellow and green.

But, before you can plan the perfect place in your landscape for a small weeping cherry tree, you need to know just what size and type of tree you’re dealing with!

How tall does a dwarf weeping cherry tree get?

Dwarf Weeping cherry trees are great for smaller spaces because they only grow to average heights of 8 to 12 feet. However, some of the largest and best cared for dwarf cherry trees may reach a maximum height of approximately 15 feet or more.

Read on below and learn all about dwarf cherry trees, including a full planting and care guide!

Weeping cherry tree species of the dwarf variety are not scarce; there are countless types to choose from starting with the smallest of the bunch, the Hiromi dwarf cherry tree, to the largest specimens which reach heights of 15 feet or taller.

Here’s the most significant information you need to know about dwarf weeping cherry trees before planting, below, at a glance.

The most noticeable features of the dwarf weeping cherry tree is its rounded and drooping (or weeping) branches and the bright pink or white blossoms it produces for a week or two each spring. Depending on the species, the color of the flower blossoms may be solid white, off-white, yellowish-green, light pink, or bright vivid pink.

Most cherry trees bloom from late March to early April, including weeping cherry trees of dwarf varieties. The exact bloom time of your dwarf weeping cherry tree each spring depends on a few factors, such as the weather and amount of rainfall for the year, how well it handled the winter, and how well you are taking care of it with water, fertilizer, and pruning.

Do I Need Two Dwarf Cherry Trees To Produce Fruit?

Unless you are using the Dwarf variety, Stella, you’ll need 2 to 3 individual trees for them to pollinate themselves and produce fruit. But, again, dwarf cherry weeping cherries aren’t really for eating (though they are nice to look at).

The dwarf weeping cherry has a growth rate of 1 to 2 feet per year, which is the standard growth rate for cherry trees in general. That means, depending on how old the tree is when you plant it, you’ll only need a few years for it to reach it’s maximum height.

Once you’ve decided to plant a dwarf weeping cherry tree, you need to pick the very best one for you and your tastes.

Here are some of the most popular and well-known dwarf weeping cherry varieties:

Both the Snow Fountain and Japanese dwarf weeping cherry trees reach heights of 10 to 15 feet. The Hiromi is a genuine dwarf, often reaching heights of just 3 to 6 feet.

What Is the Smallest Weeping Cherry Tree?

The Prunus jacquemontii, or Hiromi, is the smallest of all weeping cherry trees. It’s the only one that rarely reaches heights of even just 8 feet. More often than not, this little beauty caps out at around 4 or 5 feet.

How To Plant a Dwarf Weeping Cherry Tree

The best soil for dwarf weeping cherry trees is light, loamy, and well-draining. Adding organic compost amendments ensures that the soil is nutritious and acidic enough for the cherry trees to thrive.

Technically speaking the average dwarfy weeping cherry tree survives with a mere six hours of direct light per day. However, they thrive in full-light conditions (which is why you need to keep spacing in mind while planting them!).

Depending on the species of weeping dwarf cherry trees you’re planting, and how large they will be, the average suggested spacing is between 6 and 15 feet. Proper spacing between your trees ensures proper light reaches them from all possible angles. It also allows enough room between trees for adequate airflow.

The hole for your dwarf weeping cherry tree doesn’t need to be deeper than the height of the root ball. However, it needs to be roughly three times as wide as the root ball (that way the roots can stretch out in all directions).

Place the rootball of the tree directly in the center of the hole and uncurl the roots slowly and carefully. Pull the roots out and spread them in all directions, and then begin adding the backfill into the hole.

Add a bit of fresh organic compost to the hole as you fill it in as well, preferably covering the entire rootball if possible.

When the hole is filled in completely, lightly press down around the base of the tree with your foot, compacting the soil. Add a bit more backfill or organic compost if needed before moving on.

Once your trees are planted, water them daily for the first 5 to 10 days, and then once every 2 or 3 days for another 5 to 10 days. After the first 3 or 4 weeks, reduce watering to just once every week or so (as needed to keep the soil from drying out completely).

Adding a 2 to 4-inch layer of mulch around the trees helps retain moisture for longer periods of time. Mulch may also act as a form of pest control and weed control. If you plan to add mulch, do so directly after filling in your holes and watering your new trees.

How To Prune a Dwarf Weeping Cherry Tree

How To Propagate a Dwarf Weeping Cherry Tree

Propagation of common dwarf weeping cherry trees is typically done via fresh cuttings in the spring. Most gardeners perform the 45-angel horizontal cutting technique, dip the fresh-cut stem in rooting hormone (or cinnamon), and then stick it in a container or growing pod, with organic compost and soil, to root.

The best time to fertilize your dwarf weeping cherry trees is in the early spring just as the trees begin to open their first buds and reveal green leaves.

This slow-release all-purpose flowering tree and shrub fertilizer is extremely ideal for any dwarf weeping cherry tree. Simply apply it once per year, in the spring, and your tree is good to go all year. The fertilizer provides all the nutrient supplements the tree needs, and without the risk of burning them.

Now that we’ve discussed practically everything there is to know about the dwarfy weeping cheery tree, let’s have a look at the final puzzle pieces; the common problems, as well as the solutions for them.

Thankfully, dwarf weeping cherry trees don’t have as many serious issues as most fruit-bearing trees.

But, of course, there are a few issues to be aware of:

The bane of everything from garden variety vegetables to your precious dwarf weeping cherry trees, aphids set up shop and wreak havoc. Japanese beetles are another species of pest that may cause serious damage to your tree’s branches and trunk.

If you catch the problem early on, you can remove the affected branches and burn them, as well as apply organic pest control (cinnamon, lemon juice, ladybugs). Unfortunately, insecticide is the best way to deal with aphids and Japanese beetles once they are infesting your trees.

Spider mites and caterpillars are equally as detrimental to your cherry trees’ health. Both types of pests are known for moving in and turning your plants and trees into an all-you-can-eat buffet.

Both spider mites and caterpillars may be removed by hand if you notice them before their numbers are swollen. Once there is an infestation, pesticides may be necessary.

Another of the more typical problems with weeping cherry’s is leaf spot, a fungal issue. The disease slows down the overall growth rates if it affects too much of the tree, as well as making the appearance much less desirable.

Remove the leaves with spots and burn or remove them from your property (so they don’t contaminate more trees), and apply fungicide to the trees’ leaves.

A fungal disease that affects the foliage of plants and trees, powdery mildew is a weeping cherry tree owner’s worst nightmare (if they enjoy the beauty of their tree’s appearance). Left unchecked, you’re entire tree will be covered in mold.

Remove the parts of the tree with mildew and apply fungicide to the rest of the tree to prevent further spread of the infection.

Where Can I Buy a Dwarf Weeping Cherry Tree?

Local co-ops, garden centers, and big-box stores like Home Depot and Walmart all sell dwarf weeping cherry trees (but, not all the time).

Don’t have the time to pick up a tree in person, or don’t have a nursery near you that carries them? No problem.

Dwarf Weeping Cherry Trees are some of the most gorgeous flowering trees around, especially if you enjoy whites, pinks, and reds. Not only do the trees have beautiful blooms, but their drooping branches lend the tree a majestic “weeping” effect.

The best part is that they aren’t as prone to pests and disease as other trees, and they are also among the easiest flowering trees to prune and care for after planting as well!