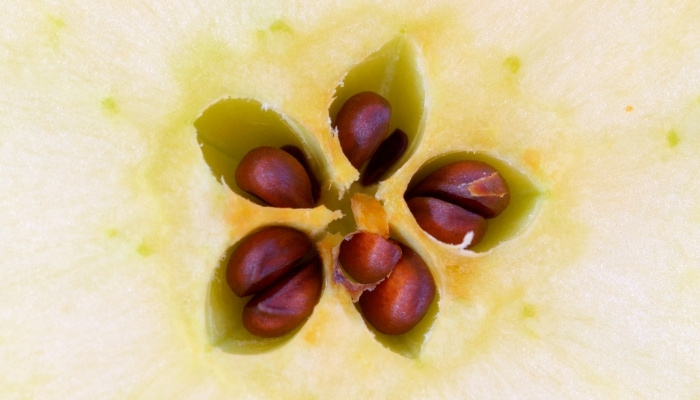 Have you ever wondered why there are so many apple varieties at the supermarket? You have cultivars and grafted apples to thank for that.

The same applies to most fruits you buy. They’re not natural species. If you’re tempted to plant some of those apple seeds, the results might surprise if not downright disappoint you.

Will apples grow true to seed? The apple tree that grows from seed has little to do with the parent tree. The tree will often be smaller while the fruits might look nothing like the apple you took the seed from. Cultivars are often unpredictable, and you might end up with a totally different apple with inferior quality.

Every time you plant a seed, you take a gamble, but with apple seeds, the odds are often stacked against you. Read more to find out what makes planting apple seeds such a risky endeavor.

Growing Apples From Seed – The Facts

Growing apples requires a lot more work and time than growing vegetables or flowering plants. It takes a fruit tree up to 5 years on average to mature and start bearing fruits.

So it stands to reason that you should know a little more about the apple seeds you’re going to plant before you make such an investment of your time.

Can You Grow an Apple Tree From Seed?

Technically, you can grow an apple tree from seed, but the resulting tree will not look anything like the parent apple tree. Even the fruits will not have the same quality as the apple fruit you took the seed from.

Most likely, you’ll end up with a smaller and less tasty fruit with a different color and flavor as well. Most apples in the market are cultivars and grafted trees, which makes planting apple seeds an unpredictable task.

Problems With Growing Apples From Seed

The problem with growing apples from seed is that you have no idea what type of tree will grow in your garden. As is the case with cultivars and grafted trees, the genes of one of the parents or grandparents will end up prevailing and shaping the tree and its fruits.

Since apples don’t come with a detailed family history, there’s no guarantee that when you plant a red apple seed, you won’t eventually get a green apple or some other variety.

You Will End Up With a Different Variety

To develop a cultivar, different varieties are selected carefully to create the perfect apple with the desired taste, flavor, and texture. This works well for experts who know what they’re doing.

However, when you try to plant one of those seeds, you’ll often have a totally different apple variety. It will take the tree years before it bears fruit, so it’s a total waste of time and effort.

The Fruit May Not Taste Great

Another problem with planting apples from seed is that the taste of the fruit will be inferior to the original apple, not to mention that the fruits might not reach their full development due to being too sensitive to adverse growing conditions.

It May Be a Decade Before Fruit Grows (If at All)

It’s a given that planting a fruit tree, any fruit tree, from seed takes longer for the tree to mature and bear fruits than using other propagation methods. This applies to apples as well.

The apple tree growing from seed often takes more years to reach maturity, in some cases 10 years or more. Some trees won’t even flower at all.

Not all seeds will germinate. That’s just a fact that every gardener knows, even more so if you’re trying to plant a cultivar seed as is the case with apples. Such seeds are notoriously hard to germinate.

Stratification is by far the best method of germinating apple seeds. It involves chilling the seeds in the fridge for up to 3 months to encourage them to germinate. Without stratification, apple seeds will have a poor germination rate.

How To Plant Apple Seeds

How To Graft an Apple Tree

Grafting is one way of speeding up the development of the apple tree and avoiding the many pitfalls of growing apples from seed. In general, you’ll be grafting the apple tree on a rootstock using one of these three grafting methods.

Downsides of Grafting an Apple Tree

Since you’re using two trees, preferably of the same species, to graft an apple tree, there’s a bigger risk of transmitting diseases from the rootstock to the apple tree or vice versa.

You also need to care for the grafted tree in the early months after grafting to make sure that it takes. There’s also a risk of limbs breaking easily.

Can You Grow Apple Seeds Without Soil?

You can grow a hydroponic apple tree using grafting. Growing apple seeds without soil will take much longer for the tree to reach maturity than if you planted the seeds in the soil.

What Is the Best Soil for Potted Apple Trees?

Normal soil mixed with compost is the best soil for potted apple trees.

How Should You Care for Potted Apple Trees in Winter?

Move the potted apple trees to a sheltered area where it’s still cold but not freezing. In the spring, take them out again.

Growing apple trees from seed has many issues. It takes years for the tree to mature and start to bear fruit. When that happens, you might end up with a fruit of inferior size and quality than that of the parent apple.